We had our first game of Ambush Z over the memorial day weekend. Here are some photos of the game: 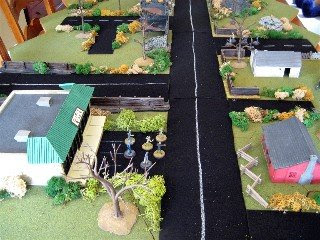 This first photo gives shows the table layout before the action started. It's the first scenario in the rulebook, modified slightly to take advantage of the terrain I currently have. The objective is the red house (by Perry Miniatures) at the lower right. The teams had to rescue 2 scientists holed up in the house. 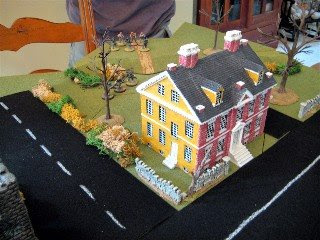 The teams started in the upper left hand corner, behind the colonial brick house. Our dear friends Cliff and Deb, as well as my wife, controlled 3 teams of 3 spec ops types. They had to cross the board, rescue the scientists, and escort them off the board. The game length was supposed to be 6 turns, but being everyone's first game we ignored the turn limit. All the players are non-gamers, and my wife Carmen only has some TSATF experience under her belt. I was the zombie player/umpire.

I won't go through a turn-by-turn description here, but give an overview.
The game started with an ominous event, when a quirk of fate card rendered the team's support weapon useless. So much for the M-60! 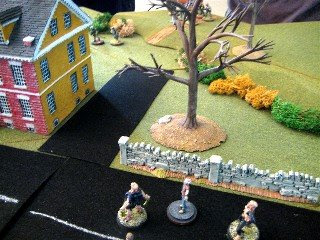 The first zombies move towards the team

Much to my surprise, Deb showed great tactical insight and immediately indicated that her team would climb to the upper floor of the ruined building to provide covering fire while the 2 remaining teams moved out towards the target. 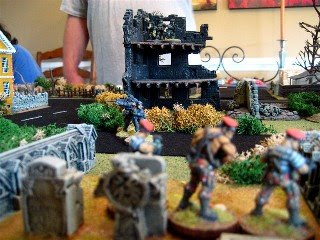 Note Deb's team on the top floor of the ruin 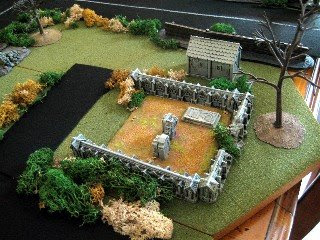 A pre-game view of the cemetary

Cliff and Carmen's teams moved smartly through the graveyard, dispatching several zombies along the way. Deb's team, although hampered by some bad dice rolls, did a great job of eliminating larger threats before they could get close to the moving teams. 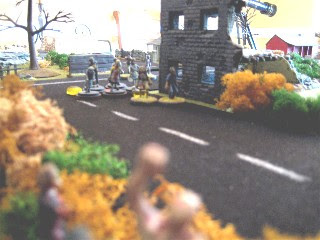 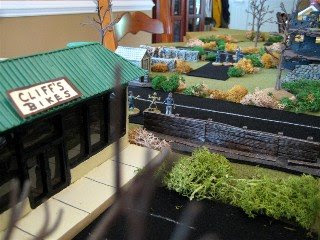 It didn't take long for the 2 moving teams to approach the target house. The 2 scientists, seeing their rescuers approaching, burst out of the house and linked up with Cliff's team.

It was also at this time that another quirk of fate card brought happy news - Deb's team witnessed some inspired leadership and their troop quality went up a die! 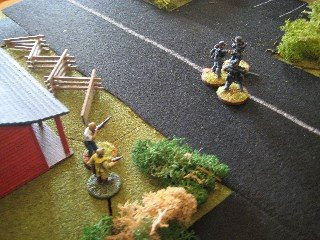 The scientists are rescued...or are they?

The teams moved back towards their entry point, again eliminating any zombie threats as they appeared. During the first part of the game, taking into account everyone's inexperience with gaming, I reduced the number of zombies appearing during the reinforcement segment. At the player's insistence, I removed this artificial limit and gave them "both barrels" for the remainder of the game. That's when things began to fall apart.

In true zombie movie style, as the teams approached their exit point the nearby "hot spots" spawned massive numbers of zombies. By this time, Deb had removed her overwatch team from the ruined building so the zombies were able to approach the teams up close and personally! 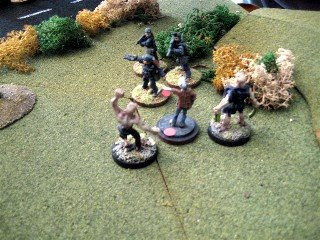 The mission starts to unravel

Two large mobs of zombies descended upon the teams, and in the first melee of the game were able to kill one of Carmen's team members.

The teams move as quickly as possible towards the exit, but neglected to use any type of fire-and-move tactics, resulting in a horde of zombies descending upon Cliff and Carmen's teams. Deb did all she could to kill as many zombies as possible, but the writing was on the wall.

In a massive melee, another team member went down, and then, horribly, one of the scientists bit the dust. 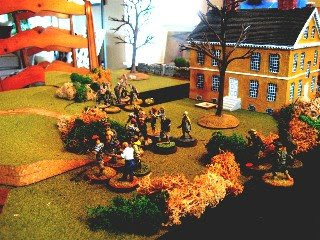 The huge melee that resulted in 2 team members lost

Finally, the 3 teams regrouped and were able to kill any zombies that were close enough to pose a threat. The teams managed to exit with one scientist as a dependent. 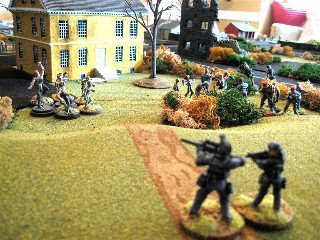 A team covers the other's escape

The humans won, but just barely.

I can't begin to tell you how much fun we had playing this game! Upon further study, I was able to identify a few rules that were either misinterpreted, or not applied. I'm not sure if it would have made a huge amount of difference to the outcome, but next time we'll be even more prepared!

Very cool stuff and amazing terrain work. Ambush Z is definitely on my list of games to try in the future.

I have one suggestion if you can swing it: bigger pics! It's kind of hard to tell what's going on in some of the pictures.

I am still trying to figure out this whole "blog" thing, and my photographic skills aren't much better.

I'm sure I'll figure out how to make the photos larger next time!

As one of the players in this game, I have to say it was fun for sure and we did learn a great deal about the intricacies of the rules as we went.

Deb and Cliff were awesome to play with, and how convenient for us that they're our neighbors next door!

I also wish the pics came out better--Greg's painting job and what he did with terrrain were excellent!

Thanks to Greg (and Carmen) and his awesome terrain and paint work, and rules moderation/interpretation, our first gaming experience was very engaging and fun. We are looking forward to the next game.

I really liked the AAR. I have yet to play Ambush Z but I run Ambush Alley at local and regional conventions all of the time. I hope to check out Ambush Z but I got Force on Force because I have 20mm WWII sitting around that I used to use with Arc of Fire. I am very eager to check out FOF however and Shawn says that it should be really fun. This is Watchtower78 from the AA Forums by the way. Great blog! I agree with Piers too that your Perry Sudan Brits are great! Check out my blog. I just started it a few days ago so it's still new. www.armchairgeneral1.blogspot.com

Looks like a really fun game nice figures and terrian