...okay, insert the "best intentions.." quote here. Between work responsibilities and our major house-painting project, the posting of photos (or anything else for that matter) has been delayed! AARGH!!

I'll take this post to fill everyone in on what my areas of interest are, as well as what my collection consists of.

Through the years, since 1985 at least, I've collected several different periods. Many have fallen by the wayside, some unintentionally, and others I have axed due to a waning interest. I have pared down my collection to the following:

- 28mm AWI
- 28mm WW1
- 28mm Early Napoleonic (Eureka's fantastic new releases!)
- 28mm F&IW
- 28mm Early Imperial Roman and Ancient Briton (this got started when I delved into WAB, and now with the Army Painter system out there it looks like I'll actually FINISH PAINTING my collection!)
- 28mm Alamo/Texas War for Independence
- 28mm Old West
- 28mm ACW (but only large skirmish sized forces - I can't envision painting thousands of miniatures for this)
- 28mm Sudan
- 28mm Zulu War
- 28mm Lord of the Rings
- 28mm "The Wind and the Lion". Actually, this includes any late 19th century miniatures that catch my eye!

- 15mm Boxer Rebellion (my very first completed armies!)
- 15mm WW2 - Flames of War, but I don't use the rules. I've used Too Fat Lardies Troops, Weapons & Tactics and I find them to be much more to my liking. But, to each his own.

Now, this may seem like a huge array of periods but believe me, before I decided to only concentrate on this I was all over the place!

I'll end this post with a couple of old, and poorly taken, photos. I hope to have some new ones, as well as a new post, sometime next week. 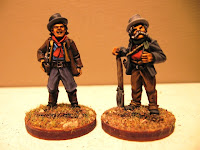 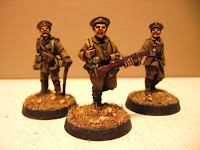 Nice looking figs. I like your use of muted colors. Look forward to reading more always so much to paint.